…Inaugurates new NNPC Board
ABUJA – The Federal government of Nigeria has denounced the appearance of long fuel queues in the Federal Capital territory,Abuja, and other major cities across the country, noting that there was absolutely no reason for oil marketers to embark on strike over unpaid fuel imports.

Minister of Petroleum Resources, Mrs. Diezani Alison-Madueke, who stated this earlier today during an inaugural meeting of the Board of the Nigerian National Petroleum Corporation, NNPC, in Abuja, further called on the marketers to end their purported strike action and cooperate with the Federal government to ensure effective products distribution to all parts of the country especially during the festive season of Eid-el Kabir. 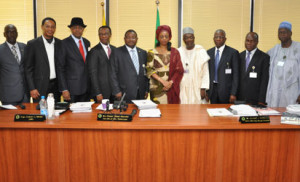 Alison-Madueke noted that the government was prepared to do everything in its power to ensure that Nigerians get products to Nigerians all over the country, even as she disclosed that the Nigerian National Petroleum Corporation, NNPC, has more than 40 days stock of petroleum products at its disposal.

Meanwhile, a statement issued by Paul Nwabuikwu, the Senior Special Assistant to the Coordinating Minister for the Economy and Minister of Finance, Ngozi Okonjo-Iweala described the marketers claim as baseless and inaccurate.

He explained that marketers with legitimate claims have been fully paid adding that the only ones yet to receive payments are those indicted by the Aig-Imoukhuede Presidential Committee which investigated fuel subsidy payments.

“For instance, between April and May 2012, Batches D/12 and E/12 involving 14 oil marketers
with a claim of N17 billion were fully settled through the issuance of Sovereign Debt Notes and
other relevant documentation.

“In addition, since the directive by the Coordinating Minister to the DMO to continue payments  of all verified claims, N25.6 billion worth of claims have been fully settled with the issuance of  Sovereign Debt Notes. In all, between April and August this year, in respect of 2012 PMS claims, Sovereign Debt.”

He added that Notes amounting to N42.666 billion have been issued to 31 oil marketers.  “However, the claims by marketers recommended for further investigation by the Aig-Imoukhuede Presidential Committee have not been paid. Payments or sanctions to this category of marketers will be determined by the outcome of investigations.

The statement noted that, “Against this background, it is clear that the strike was instigated mainly by marketers who were indicted by the Aig-Imoukhuede Committee which investigated fuel subsidy payments.

“Their obvious intention is to blackmail the Federal Government in order to escape sanctions  for the crimes they have committed. Nigerians should not be deceived by their antics.

“Such tactics will not succeed because the Federal Government is determined to ensure that  persons and organisations which did the wrong things do not get away with wrong actions and  wrong behavior.”

The Minister observed that the last fully constituted Board of NNPC was dissolved in 2007, but given the nature of the Corporation’s business, the then President, late Umaru Yar’adua granted approval for the constitution of an interim Board for the Corporation. The interim situation remained until the recent appointment on July 16, 2012 to the fully reconstituted board by President Goodluck Jonathan.

“It is clear that members of the Board were carefully selected based on their pedigree, experience and integrity at this critical time in our nation’s history, as we endeavor to progressively take the NNPC towards the goal of becoming a world-class oil and gas company.

The success of this critical task will no doubt move the oil and gas industry and, by necessary extension the Nigerian economy, forward,” she stated.

She reminded the newly constituted Board that their appointment is “a call to duty which requires the support of NNPC top management in steering the Corporation in the desired direction.”

She noted recent achievements of the Ministry to include “introduction of various measures to checkmate sharp practices with respect to importation and delivery of products to the sector, and a notable increase in crude production and ensuring support to the local refineries to ensure improvement in domestic products supply.”

Alison-Madueke further noted that the Board had recorded “unprecedented increase in gas supply to meet power demand; special focus on safety and security of pipeline infrastructure; aggressive revamp of our refineries and enhanced asset integrity; targeted growth in the production profile of the National Petroleum Development Company, and on-going focus on keeping cost of doing business competitive by deploying the appropriate business models.”

She added, however, that despite these achievements, the Board was still faced with many challenges. “We must continue to ensure good corporate governance and efficient and judicious use of the Corporation’s resources, even as it awaits the passage of the Petroleum Industry Bill, PIB.

“We have a great diversity of skills present in this room and this will no doubt enable us to bring our collective experiences to bear in charting a new course for NNPC,” the Minister added.