Gunmen, yesterday reportedly bombed a base station belonging to an indigenous telecoms infrastructure company, IHS Nigeria, in Kano, barely 24 hours after the attack on several base stations in Borno, Yobe, Bauchi and Gombe states. Communications in the state with cell phones have been disrupted. ALTON officials put the number of base stations vandalized in the north at 26. The ALTON president said an emergency meeting of the association’s executives had been called for today (Friday) to decide on what next to do.

However,In a swift reaction claiming responsibility for mast and base stations bombings in parts of the North , Boko Haram says it sets its sight on VOA and primary schools. The extremist sect, Jama’atu ahlis sunnah lil daawati wal jihad, popularly called Boko Haram,which has launched an incessant wave of terror attacks on churches and other public places in the North, including the United Nations building in Abuja claimed responsibility for attacking telecommunication base stations in Borno, Yobe, Bauchi, and Kano states saying it was its way of punishing them for alleged culpability in aiding security agencies to kill its members.

“If it becomes impossible to continue to do business in the face of rising attacks on telecoms sites, operators will naturally suspend operations in the area, ALTON President Gbenga Adebayo said, adding; “This is because beyond base stations, these elements may begin to target telecoms operators‘ offices and data centers among other key infrastructure. That is why it is important that the situation is curtailed before it gets to that point.“

Eye-witness accounts said one of the company’s base stations was bombed in Borno on Wednesday while another one was bombed in Kano on Thursday morning. Just like they did in Borno State, the terrorists set ablaze the service-base masts of Airtel, Glo and Etisalat in Potiskum and Damaturu yesterday, allegedly killed 16 people, including the Yobe Government House Protocol Officer, Mallam Adamu, who was returning from work. An attendant in the morgue at the Sani Abacha Specialists Hospital, Damaturu told Huhuonline.com that men of the Joint Task Force, JTF and police brought in 16 bodies yesterday morning to the hospital.

The JTF in Borno State yesterday said terrorists’ attacks on telecom masts were designed to “disrupt” communication services and prevent residents from providing information on the activities of gunmen to the military and the police so that they can protect life and property. JTF spokesman Lt.-Col. Sagir Musa, in a press statement issued in Maiduguri, said that the terrorists had turned to the destruction of Global System of Mobile Communication (GSM) masts and other communication facilities in some areas of Maiduguri to frustrate residents from giving the military vital information.

Telecoms infrastructure analysts in the country have put the average cost of a base station at $250,000, which amounts to N39.47m at an exchange rate of N157.91 to a dollar as at Thursday. With 26 base stations already destroyed, an investment of N1.03bn might have gone down the drain.

Contrary to the belief that only MTN, Airtel and Glo were affected, the Executive Secretary, ALTON, Mr. Gbolahan Awonuga, said the attack affected all telecoms operators, including Multilinks and Helios Tower.

A formal report sent by Multilinks to ALTON, which was made available to newsmen  confirmed that Multilinks base stations located at Mainok Village, Borno and another one at Abari Village in Damaturu, were damaged. The report said, “Reports obtained from our personnel indicate that extremists numbering about 40 stormed the area at about 22:20 Hrs on 05/09/2012 and immediately launched an attack on the MTN cell site. After the attack on MTN cell site, the extremists proceeded to our site which is close to the MTN site to launch a similar attack.

Disturbed by the attacks, the Nigerian Communications Commission (NCC) has called for quick passage of the Telecom Infrastructure Bill, which seeks to make telecommunication infrastructure a critical national infrastructure. Director, Public Affairs of the NCC, Mr. Tony Ojobor, who made the appeal yesterday in Abuja, said that the bill, if passed into law, would make it a criminal offence and economic sabotage for anyone to vandalise telecom infrastructure in the country.

He explained that the commission had not received formal report on the number of base stations affected in the attack and their locations, adding that as a regulator, the commission expects service providers to get in touch with the commission whenever there are issues affecting quality of service in the country

“We are attacking GSM companies because they have helped security agencies to arrest and kill many of our members, and we will continue with our attacks on them until they stop,” Mr. Abu Qaqa, spokesperson for the sect enthused.

Mr. Qaqa’s statement came just as security officials lambasted the sect, and faulted its logic that telecommunication companies had a hand in the killing of its members. “How can they say telecom companies are aiding security forces to arrest their members when a lot of them are tired and disgruntled” said a Joint Task Force official who argued that the difficulties the sect is currently facing has its root in internal rebellion and the counter response of victims.

“Did they register their SIM cards as Boko Haram members?” the JTF official queried adding that security agencies have no need for telecommunication companies to arrest sect members.

In its message, Boko Haram also expanded on its operational objectives beyond the establishment of an Islamic state, putting on notice those that try to prevent them as enemy that will be “fought with all we have”.

Mr. Qaqa put the Hausa service of the Voice of America in this category accusing the international broadcaster for “fighting against Islamic religion”. For all journalists working with the broadcaster, the sect promised a reward of blood, adding “We advise any reporter or correspondent working with the station to resign, otherwise we will not hesitate to harm 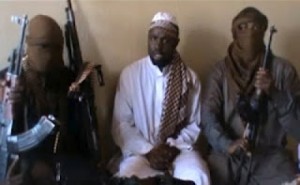 any of them we come across anywhere.”

Mr. Qaqa also said the sect will intensify attacks on primary schools as a result of the “attack on Islamic schools by security agencies” boasting that the recent resolve by governors and traditional rulers in the north to fight the sect “will come to nothing”.