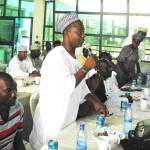 NERC, has launched the Ikeja Forum Office that will address customers complains.

The commissioning of the Ikeja Forum office became necessary following the spate of complains from electricity consumers in the country.
The Forum office is expected to protect vulnerable electricity consumers from exploitation by service provider.
Minister of State for Power, Mr. Darius Ishaku who was present at the commission of the office in Lagos said the forum office is the second level of appeal in the chain of consumer complains adding that Issues beyond the forum are to be handle at the final appeal stage with NERC.
With such an opportunity to disputes resolution, Ishaku stressed that it will significantly forestall incidences of protracted and expensive litigations.
He also congratulated the newly inaugurated forum members who have been chosen to serve in this national assignment.
He said “Am aware they were chosen base on their qualifications, integrity and depth of experience.
“This call to duty will require transparency, team work, fairness, consistency and the deployment of their professional experience. I wish you the best of luck and Gods guidance in your discharge of your assignment.”
Chairman of NERC, Dr. Sam Amadi in his address said the commission strives to ensure that vulnerable consumers are fully protected from exploitation by the service providers noting that “Vital consumer issues like billing, metering, connectivity, price often create disputes between consumers and the service provider.”
In line with the commission mandate provided for in section 32, 80, 83 and the powers conferred by section 96 (1) of the Electric Power Sector Reform Act 2005, Amadi said NERC has developed the Customer Complaints Redress Mechanism for handling customer complaints.
Governor Babatunde Fashola of Lagos while delivering his address, said power shortage in the country can only be solved when everyone begins to conserve water and power.
According to Fashola, “The more water we waste, the more energy will also be wasted; when there is need to pump water, energy would be required. The amount of money we waste on energy reduces the country’s disposable income and makes life more challenging to live. It makes production more expensive as well.”
The governor added “So the conservation of both water and power is the bedrock of sustainability in the country.”
“From our survey at Agidingbi, it shows that much energy is generated across the state but they are generated in high cost. As this energy is generated, some were also wasted because they were not shared.”
On how to solve the issue power wastage, Fashola noted that every citizens of the country must be able to read and measure his own individual energy consumption, adding that this will help Nigerians to know whatever they consume monthly.
“On our part in Lagos state, we have posted on our website how residents of the state can calculate their energy consumption,” the governor said
Chairman, Senate committee on Power, Mr. Phillip Aduda  urged the urge the NERC to ensure that in the next 16 months, the entire property in the country is fully metre.
According to him, “this will help nip in the bud the confrontation between the energy provider and the consumer in the country which was as a result of the estimated bill issued by the energy provider.”
“And by then, we will be able to conserve power generated in the country. And the mega watts generated daily can be increase.”
Meanwhile, The Federal Government has assured Nigerians that it will sustain and improve the current peak of 4,321 Mega Watt (MW) power generations in the country after the rainy season elapsed.
This became necessary following allegations that power generation in the country will drop after the rainy season elapsed.
The minister of State for Power, Mr. Darius Ishaku said “This year’s rainy season has been good for the country. And we are drawing from it. We hope and we are working hard to make sure that when the rainy season stops, we will be able to equalise the difference in power from our thermal stations.”
The minister also debunked claims that power generation has dropped in the country by 1,000MW.
He said “We do not normally respond to such publications but noting the weighty issues raised, we decided to strengthen the facts. The claim that the generation has gone down 1000 mega-watts is false.
“The publication is therefore to misinform the public and blackmail the Federal Republic of Nigeria. In fact the new peak of power generation of 4,321MW was recorded on the 31 of August 2012 several days after the exist of the former minister.
“The Federal Republic of Nigeria will therefore not be distracted by this malicious campaign of calumny. We remain focus on the resolve to provide Nigerians with adequate and reliable supply of electricity and this is beyond the contribution of any individual.
It was alleged that some of the power stations that were the worst affected by the drop in supply include the Geregu Power Station in Kogi State, which was generating an average of 210MW  per day, but dropped to 10MW at the weekend. The drop in power output at Geregu was blamed on shortage in gas supply.
It was also alleged that the Okpai Power Plant in Delta State, which was generating 466MW per day but has also dropped to 276MW, while Sapele dropped from 180MW to zero.
The Omotosho Power Station in Okitipupa Local Government Area of Ondo State, which is under the National Integrated Power Projects (NIPP) was not left, it was said that it also witnessed a drop in generation from 230MW to 167MW. While electricity generated from the Egbin Power Station in Lagos, the biggest power station in the country, dropped from 900MW to 453MW.
Power generation from Kainji Power Station also declined to 187MW from 193MW, while Jebba, which was generating 402MW, dropped to 385MW.
Afam IV Power Station in Rivers State has also witnessed a drop in performance with generation falling to 315MW after peaking at 458MW.