US Needs to Invest in E&P, Infrastructure for 21st Century Demand-Hofmeister

The United States needs to invest in developing its energy resources and updating its energy refining and transportation infrastructure governance system in order to meet U.S. energy needs in the 21st century, John Hofmeister told attendees Tuesday at the XV Rice Global Engineering & Construction Forum at Rice University in Houston.

The large, technologically advanced energy system built in the United States in the 20th century catapulted the nation into the world’s number one position economically, enabling two world wars to be won for freedom that benefited the entire world, said Hofmeister, the former president of Shell and head of the Citizens for Affordable Energy.

The country’s existing nuclear reactors on average are 30 years old, approaching the end of their 40-year life expectations, and dams that were built to generate hydropower have been found to become less efficient at generating power over time due to the to buildup of silt. Many existing gas-fired power plants are also aging, Hofmeister said.

While the United States has “acres and acres” of solar panels, these panels “use model T Ford technology on America’s modern superhighways,” Hofmeister said.

Nanotechnology has just begun the effort to identify previously unknown materials which Hofmeister believes will generate 40 plus percent efficiency and turn solar into a reliable product. However, it remains unclear when this will occur, Hofmeister noted.

With a population expected to reach 400 million in 28 years, Hofmeister questioned w 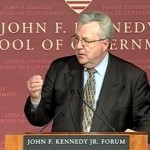 hy the United States was not investing more in developing its oil and natural gas resources as well as its infrastructure.

“It’s a matter of grabbing the proverbial bull by the horns and saying we can’t continue on a 20th century energy system forever as we enter the second decade of the 21st century.”

The United States will also have to contend with future Chinese oil demand, which is expected to reach 20 million barrels of oil per day by 2020. With China investing in exploration programs worldwide in exchange for future oil deliveries, the rest of the world will be left to bid up the price of the remaining oil supply, meaning that some countries such as Israel may be at the end of the line, Hofmeister said.

While the economic recession hit U.S. transportation fuel demand hard, the nation will still need to invest not only in increasing oil production, but displacing oil with natural gas, either through compressed natural gas vehicles or methanol mixed with gasoline, to displace oil imports.

“If you think we can live off imports to meet 20 million barrel demand, we’re buying something that doesn’t exist,” Hofmeister said.

However, the United States’ efforts to invest in developing its energy resources and infrastructure are being held back not only by the far left wing groups, but right-wing political groups as well, or what Hofmeister calls the “perversity of partisanship”.

“The fact that political time trumps energy time 100 percent of the time also is a barrier to the United States moving from the cusp of prosperity becoming a reality,” Hofmeister said.

However, in June 2012, Energy Secretary Steven Chu reversed his previous stance on hydrogen fuel cells, saying that research in this area should be a part of future U.S. energy development.

The continuing morass of governance, or number of regulatory agencies that oil and gas companies must file with to conduct exploratory drilling, is also delaying investment in developing U.S. energy resources, Hofmeister said, citing the lengthy permitting process Shell faced since it acquired leases in the Chukchi and Beaufort seas in 2005.

Greater voter turnout to elect public officials is one remedy Hofmeister sees to addressing these issues.

“We can’t achieve a 21st energy system under the current government,” said Hofmeister, adding that the United States could be facing blackouts, brownouts, and lines at the gasoline pump within the next decade if steps are taken to address the nation’s energy needs and infrastructure.

“We need an independent regulatory agency that is activated by citizens,” said Hofmeister. “We should demand what it takes to govern an energy system.”

Hofmeister does not see shale gas and oil as the game changer to achieve an energy system with zero imports, pointing out the decline rates of as much as 50 percent in the first year.

“There aren’t enough steel tubulars and rigs to keep shale exploration and production activity going,” said Hofmeister, noting that shale production has a natural ceiling and will reach a sustained maximum. “We won’t solve the problem with just shale.”