ABUJA-IN a drastic effort aimed at eliminating the persistent long petrol queues across major cities in Nigeria the Nigerian National Petroleum Corporation (NNPC) has revealed that additional four (4) million litres of premium motor spirit (petrol) has been released to marketers from the Kaduna Refining and Petrochemical Company (KRPC). This is coming on the heels of the Corporation’s earlier announcement of having enough domestic fuel supply to last 32 days thereby urging Nigerians not to resort to panic buying.

The Group Managing Director of the NNPC, Engr. Andrew Yakubu, made this known on Tuesday during a meeting between the Senate Committee on Petroleum Downstream at the National Assembly Complex, Abuja.
Represented by the Group Executive Director, Corporate Services, Dr. Peter Nmadu, the GMD said the Corporation in its bid to keep the nation wet with petrol after the rupturing of the System 2B Pipeline at Arepo by vandals, made alternative arrangements for products distribution by diverting petroleum products to some private depots in Lagos for onward trucking to petrol stations.
He said the NNPC had relied on massive trucking of the products across the country to ameliorate the pains of motorists in the country adding that one-third of the nation’s daily fuel consumption is pumped through the System 2B Pipeline that has been ruptured.
“In order to alleviate the hardship being inflicted on Nigerians by the product thieves who ruptured the NNPC System 2B Pipeline at Arepo, the Kaduna Refining and Petrochemical Company is supplying additional four million litres of fuel to bridge the gap and ease the hiccup. With the ongoing efforts, we are optimistic that the queues will fizzle out,” Dr. Nmadu submitted.
He added that some of the NNPC trucks that were conveying fuel to the north were also trapped in Lokoja due to the floods, assuring that all hands were on deck to keep the nation wet with petroleum products.
The Acting GMD, while decrying the activities of pipeline vandals, noted with that three NNPC staff were still missing and some others receiving treatment which they sustained while trying to repair the ruptured pipeline a couple of weeks ago.
Responding to the question of a likely strike by the in-house unions due to the missing personnel, Dr. Nmadu said the management has not receive any notice of strike action by the in-house unions.
In his remarks, the Chairman of the Senate Committee on Downstream, Magnus Abe, commiserated with the management and staff of the NNPC over the missing personnel and assured of a collaborative effort with the Nigerian Police to help rescue the missing staff.
Speaking in similar vein, the Vice Chairman of the Committee, Alh. Danjuma Goje commended the Corporation for its pragmatic measure by increasing the number of petroleum products trucks to every nook and cranny of the country to address the challenge of fuel queues.
Inspite of the Governments seeming concerted effort to reduce fuel queues in the Country, the long vehicular queues have continued across major cities in Nigeria, even as black market operators have continued to smile to the Bank. in Abuja a 5 liters container of petrol goes for as high as N2500.00 while 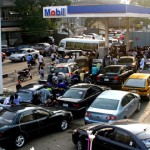 in Lagos the same quantity goes for about N2000.00 depending on the negotiation.