YENAGOA- Disturbed by the level of devastation wrought by the raging flood in most parts of the country especially in the Niger Delta region, Minister of Petroleum Resources, Mrs. Diezani Alison-Madueke, on Thursday described the situation as a major tragic disaster in the history of Nigeria. 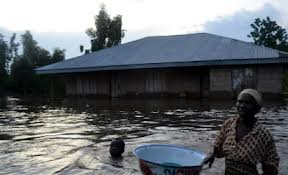 Speaking at Government House Yenagoa after an extensive fly-over tour of some flood-impacted communities in Delta, Rivers and Bayelsa States, Mrs. Alison-Madueke expressed shock and disbelief at the level of devastation inflicted on the communities by the flood.

“I have flown over other communities in Delta and Rivers States as well as my own village in Bayelsa State and in all these areas we could not find a single solid ground to land and that in itself means that we are facing a major tragedy. It means that at this time, Bayelsa State and other impacted states are faced with looming food crisis. We are actually facing a crisis situation and we must act swiftly and collectively to seek a robust solution to the disaster,” Alison-Madueke stated.

On the impact of the flood on oil and gas operations, most of which are domiciled in the region, the Minister stated: “At this point in time, we have not received any report that any of our installations have been adversely affected but we are still receiving the reports as we speak. If the water level continues to rise, we will find out what the impact is but as at now we have no report to that effect.”
Receiving the Minister earlier in his office, Bayelsa State governor Seriake Dickson thanked the Petroleum Minister for the solidarity visit while describing her as “our beloved daughter in whom we are well pleased.”

“I want to thank you for your time and the solidarity shown in this  period of great tragedy,” Governor Dickson said.

Before leaving Yenagoa, the Minister took time out to visit the headquarters of the Nigerian Content Development and Monitoring Board, NCDMB, in solidarity with some staff members whose homes have been ravaged by the flood.