By Ikenna UGWU
LAGOS: Samsung Electronics’, the world’s largest maker of mobile handsets, has rolled out its highly anticipated Galaxy Note II in Nigeria, adding a new Galaxy device to its range of products in this category. The device, a mix of smartphone and tablet with an improved digital stylus called the S Pen, was unveiled to the Nigerian public at an elaborate ceremony at Westown Hotel in Ikeja, Lagos on Thursday. The launch of the device in Nigeria is coming on the heels of its initial introduction at the IFA Trade Show in Berlin and its subsequent arrival on the African continent at a colourful unboxing event in Cape Town, South Africa, in October. 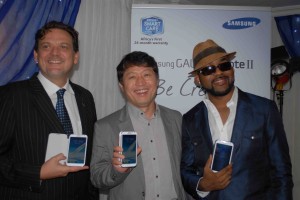 According to the Managing Director of Samsung Electronics West Africa, Mr. Bravo Kim, the Galaxy Note II will ensure that Samsung maintains its dominance over Apple and other smartphone manufacturers in the global smartphone market, by positioning itself as a niche to meet the demands of consumers desirous of larger screens and more user-friendly display.

“The Galaxy Note II is taking over the fame of its predecessor, the Galaxy Note, which opened a new category of smart mobile devices last year. A great number of innovations were injected into the product towards delivering new value to enhance the lives of our consumers and also provide them with the ultimate communication experience. The device has already gained fame, alongside a solid reputation, among individuals and mobile carriers across the globe and we are very proud of its accomplishments,” he said.

Powered by the latest version of Google’s Android operating system, Jelly Bean, the Galaxy Note II features a 1.6 GHz quad-core processor and 4G LTE connectivity. Its 5.5-inch HD Super AMOLED display is ideal for users who want the productivity of a tablet with the portability of a smartphone.

Its 8 megapixel rear-facing and 1.9 megapixel front-facing camera allows users to share photos through Share Shot, while S Beam lets users share videos, pictures and more with other Galaxy Note II and Galaxy S III devices. The Galaxy Note II is thinner and narrower than the first Galaxy Note, and it improves upon the original with longer battery life, as well as enhancements to the S Pen. It also boasts a microSD slot that allows for expansion by up to an extra 64GB of storage.

“Since the introduction of the first Galaxy Note, we have continued to enhance and expand this category of product towards delivering the ultimate communication experience to our consumers. In May 2012, we introduced ‘Premium Suite,’ a software upgrade which provides enhanced user experience. Also in August, we expanded the category further with the Galaxy Note 10.1, which has a 10.1-inch large screen, a multiscreen feature and enhanced features for users’ productivity, creativity and learning. The Galaxy Note II represents a whole new innovation for the Galaxy Note category and will help users set free their inner creativity by letting them discover information faster, capture ideas, and express them in a more organized and efficient manner,” he said.

From its inception as a small export business, Samsung has grown to become one of the world’s leading electronics companies, specializing in digital appliances and media, semiconductors, memory and system integration. Today, Samsung’s innovative and top quality products and processes are recognized all over the world. The company has continued to expand its product lines and reach, following its mission of making life better for consumers all over the world.